Religion is often stated as what you "must believe". But faith is what you do believe after asking questions. It takes moral courage to ask those questions and have real faith.

Ditching Dogma For A New Generation

In 2012, elected officials in Cleveland, Ohio faced the daunting task of slashing the school district budget. Constituents from all over understood the need to save funds, but refused to sacrifice programs specific to their interests. Religious organizations representing Muslims, Jews and Christians had been unwilling or unable to join hands and work for all parties to come to the table and compromise.

In the end, the only agreement that could be reached was to reduce support for programs that would impact the voiceless – kids. Early childhood education, high school transportation, summer school and athletics faced steep cuts.

Battling to overcome the inertia of orthodoxy, a new initiative – the Greater Cleveland Congregations (GCC) – united Christians, Muslims and Jews for the greater good. GCC activists spent a year building relationships across difference to build the trust that would allow them to join hands for a common goal: ensuring that every child has access to a first-rate education.

Before this coalition, there was no vehicle for a shared prophetic voice to shape the major public policies affecting Greater Cleveland. Other groups serve the important but different missions of educating people about religious tradition or improving a particular neighborhood. While nonpartisan, GCC engages public leaders head-on, calling them to account for their performance in office and offering support when deserved.

Their commitment to transcend dogma paid off for Cleveland: Mayor Frank Jackson, school district CEO Eric Gordon, and teachers union president David Quolke explained to the 850-plus GCC assembly how they reversed the cuts to children’s services. They also answered questions about how the public can be sure that such a crisis does not happen again.

GCC trains its members to talk to each other as individuals, not as mascots of this or that tribe. Drawing on the proven power of person-to-person organizing, GCC is transforming a city. The nation could take notes.

Equal In The Eyes Of God, If Not Man 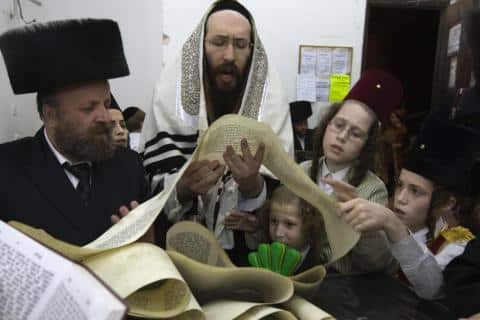 In late 2011, an ultra-Orthodox Jewish man asked an Israeli female soldier to move to the back of the bus, citing his religious belief in gender segregation. She decided to stay in her seat out of a commitment to civil rights for women.

Society often pressures us to comply with cultural or religious requests as a sign of “respect,” but moral courage asks us to re-examine what respect means. The morally courageous person will think critically about whose rights will be violated in the name of “respect.”

The female soldier, Doron Matalon, was harassed when she denied the man’s request. He reportedly called her a “whore.” Other ultra-Orthodox men on the bus joined him, shouting “prostitute” and “Shikse” (a pejorative term for a non-Jewish woman). Matalon stated, “[I] felt threatened and a huge commotion began. I yelled out for the conductor to come quick, and two male conductors rushed in. They pushed him away from me…but he continued to be abusive.”

When recounting the incident, Matalon notes that she has been asked to move to the back of the bus several times. In fact, this is not an uncommon request of women in Israel, especially in areas heavily populated by religious groups. Women’s rights organizations have repeatedly complained about certain bus lines serving ultra-Orthodox areas that enforce gender segregation. While women have the right to refuse to move under Israeli law, they may face physical and verbal abuse in an attempt to intimidate them to move, as was the case with Matalon.

Leaders in Israel are slowly beginning to grapple with gender segregation. The judge for this case released a statement which read in part, “In light of this growing phenomenon of women’s exclusion …, I believe a dangerous cause exists here, because the aggravation of such a phenomenon endangers a democratic society when done forcibly.” For the sake of democracy, more Israeli citizens will need to exhibit Matalon’s moral courage – and sit down as a way of standing up for women’s equality.