Footnotes for Don't Label Me

How I interpret my sources may not be how you do, so feel free to challenge my perspective -- and to do so with grace. If you motivate me to rethink my view, and convince me to revise it, I'll update the footnote in question and credit you. To start, click the icon called "Disagree?"
Introduction
Can we Talk?
Chapters 1-9
"Straight White Male"
Chapters 10-18
"Muslim Refugee"
Chapters 19-25
What Change Means
Chapters 26-31
A New Identity
Chapters 32-40
Why (And How) To
Not Be Offended
Chapters 41-46

The Lessons of Lily
Chapters 66-72

No sources or notes for this chapter.

No sources or notes for this chapter.

Chapter 12:
Is He a Homophobe?

* "'As black, I am possessed by an essence that always precedes me. I am always 'known' in advance.'"

* "Several coaches in the National Football League admitted to assuming this..."

* "Exactly one hundred years before the American Revolution, African slaves and European laborers, all exploited by landowners, rebelled together in the English settled of Jamestown, VIrginia."

* "Your Mama Laura had a great-grandfather, Angelo, from Sicily. In 1910, he was lynched."

Chapter 13:
Who You Calling Fragile?

* "Yes, I know about the theory of 'white fragility.'"

* "By the same token, almost 100 percent of America's mass shooters are white men..."

Note: My claim that "almost 100 percent of America's mass shooters are white men" is untrue. I've been made aware of this by a reader named Kyle Renwick. From his email: "No matter how I analyze Mother Jones' data (spree shooter vs mass shooter vs spree/mass shooter, coding all shooters of unknown race as white, before 2019 vs before 2018), I get that at most, 64% of the mass shooters in the database are white males." He's right. I'm wrong.

That said, according to this report from Clemson University psychology professor Robin Kowalski, 95% of school shooters in America are white -- which, in fact, is what I meant to claim. As I write in Don't Label Me, it would be unjust to coin the phrase "white-on-student violence." Even though most school shooters are white, most white people aren't school shooters. It's equally unjust to recycle the phrase "Black-on-Black" violence when most Black people don't attack each other or, for that matter, anybody else.

* "... he confronted students who tried to push him into accepting certain pronouns for transgender people."

Source: Watch this video posted by the Toronto-based Trans Rights TO, October 12, 2016.

* "Peterson fulminated about their tactics, escalated the disputed, and detonated into an internet sensation."

* "During their May 2018 debate on a stage in Toronto, Dyson denounced Peterson as a 'mean mad white man.'"

Source and note: Michael Eric Dyson, The Munk Debates, C-SPAN, May 18, 2018. Dyson says it twice in as many minutes.

Note: This was hugely disappointing, given that Dyson had earlier embraced "plural visions of the truth." See Michael Eric Dyson, "The Ghost of Cornel West," The New Republic, April 19, 2015.

* "As for Peterson, he retorted that he's not a caricature but an individual whom Dyson doesn't know."

Source: Jordan Peterson, The Munk Debates, C-SPAN, May 18, 2018. Specifically, Peterson says to Dyson, "You don't know anything about my background or where I came from and it doesn't matter to you because, fundamentally, I'm a 'mean white man.'"

Note: For an academic overview of our current cultural toxicity, read Whitney Phillips, This Is Why We Can't Have Nice Things: Mapping the Relationship Between Online Trolling and Mainstream Culture (Cambridge, MA: MIT Press, 2015).

Note: Angela Nagle, "The Lost Boys: The young men of the alt-right could define a generation of politics," The Atlantic, December 2017.

By the way, Nagle defines the alt-right as "a fractious, fluid coalition comprising bloggers and vloggers, gamers, social-media personalities, and charismatic ringleaders like [Richard] Spencer, who share an anti-establishment, anti-left politics and an enthusiasm for the career of Donald Trump."

* "It must be the fault of those 'feminist cancers' and the 'cucks' who stoop to them."

* "Will you subdue them once and for all or will you submit to a life of licking their boots?"

Note: A question like this reverberates loudly in the infamous "Flight 93" essay by Michael Anton (aka Publius Decius Mus) for The Claremont Review of Books, September 5, 2016.

Key quote: "2016 is the Flight 93 election: charge the cockpit or you die. You may die anyway. You -- or the leader of your party -- may make it into the cockpit and not know how to fly or land the plane. There are no guarantees. Except one: if you don't try, death is certain."

All of which echoes the question posed by Jefferson Davis to demoralized confederate politicians 1862: "The question for you to decide is, 'will you be slaves or will you be independent?'... [W]ill you be slaves; will you consent to be robbed of your property; to be reduced to provincial dependence; will you renounce the exercise of those rights with which you were born and which were transmitted to you by your fathers?"

* "In their telling, cooperation among Us will seal our survival. But cooperation with Them will be our demise. Outsiders, they warn, are out to defraud Us."

His nuance doesn't stop Goldberg from stating the truth about populism. "In its rhetoric," he writes, "it elevates 'the people,' but in reality it only speaks for a subset of them." (p. 293)

Krastev teems with counter-intuitive insights on the rise of fury worldwide. I strongly recommend two of his recent books: In Mistrust We Trust: Can Democracy Survive When We Don't Trust Our Leaders? (New York: TED Conferences, 2013) and Democracy Disrupted: The Politics of Global Protest (Philadelphia: University of Pennsylvania Press, 2014).

Chapter 16:
The Disadvantage of Being White

Source: Emma Green, "It Was Cultural Anxiety That Drove White, Working-Class Voters to Trump," The Atlantic, May 9, 2017.

Key quote: "Controlling for other demographic variables, three factors stood out as strong independent predictors of how white working-class people would vote. The first was anxiety about cultural change. Sixty-eight percent of white working-class voters said the American way of life needs to be protected from foreign influence. And nearly half agreed with the statement, 'things have changed so much that I often feel like a stranger in my own country.'

* "... in practically her next breath, Clinton described 'the other basket'..."

* "... that moment marked 'the single biggest spike' of the campaign."

* "One offended voter compared Clinton to a big-league bully."

Source: Ibid. Hessan is referring to"George, a 58-year-old Democrat" who wound up voting for Trump.

* "In 2014, I delivered a speech to the Wise campus of the University of Virginia."

Note: Watch the video of my formal remarks, University of Virginia at Wise, September 25, 2014.

* "'I give a lot of lectures about being brown, by which I mean mixed,' he says."

* "A former student of mine emailed me for advice."

Chapter 17:
This Is Progress?

* "'... to label them as misguided or even racist, without recognizing they are grounded in legitimate concerns'..."

* "Instant judgment 'widens the racial divide' because 'it blocks the path to understanding.'"

* "... especially 'the middle-aged white guy who, from the outside, may seem like he's got all the advantages, but has seen his world upended by economic, and cultural, and technological change.'"

* "'Obama's been so outspoken on the need for African Americans to own their shit that some black leaders complain he lectures them.'"

Note: Among the complainants have been community rock stars such as Cornel West and Ta-Nehisi Coates. As of this writing, another piece about Obama's insufficient empathy for African Americans has just been published. See Derecka Purnell, "Why Does Obama Scold Black Boys?" The New York Times, February 23, 2019.

Chapter 18:
Beware of Your Brain

* "The same brain circuits are activated whenever we're agreed with."

Source: Margaret Heffernan, Willful Blindness: Why We Ignore the Obvious at Our Peril (New York: Walker and Company, 2011), p. 45. She reports this information based on the experiment of the social psychologist Drew Westen.

* "Our biology guides us to the easy pleasure, so even highly educated people scamper into pods of purity, where they can bask in emotional warmth."

The archive contains a warning to the well-educated: "For years, political scientists tended (or perhaps wanted) to believe that emotion-driven thinking is more characteristic of less sophisticated or less knowledgeable voters. However, the more sophisticated people are politically (e.g. the more they know about an issue), the more able they are to develop complex rationalizations for dismissing data they don't want to believe. Politically knowledgeable citizens also tend to be partisans, which gives them the strongest reasons for distorted reasoning."

* "'The only important thing is the unification of the people because the other people don't mean anything.'"

* "But the brain is the last tunnel traveled by these different influences. It's the 'final common pathway,'" according to the neuroscientist Robert Sapolsky."

* "He says that human beings have zero free will because in the final analysis, our biology dictates our behavior.'"

Source and note: Robert Sapolsky interviewed by Guy Raz, "Ted Radio Hour: Hardwired," NPR, August 25, 2017. Specifically, Sapolsky tells Raz, "I don't think there's a shred of free will out there. From spending my decades thinking about behavior and the biological influences on it, I'm convinced by now free will is what we call the biology that hasn't been discovered yet."

Pay attention to his wording: that neuroscientists have not yet discovered biology friendly to free will. Maybe one day, that discovery will be made. And maybe that, in turn, is why Sapolsky ends his book, Behave, by encouraging us to exercise wise choices, as if in some hidden crevice of the cranium, we really can tap the makings of free will.

Writes Sapolsky, "Eventually, it can seem seem hopeless that you can actually fix something; can make things better. But we have no choice but to try. And if you are reading this, you are probably ideally suited to do so. You've amply proven you have intellectual tenacity. You probably also have running water, a home, adequate calories, and low odds of festering with a bad parasitic disease. You probably don't have to worry about Ebola virus, warlords, or being invisible in your world. And you've been educated. In other words, you're one of the lucky humans. So try." (p. 674)

* "But then how do we explain 'consciousness' -- which another neuroscientist, Timothy Wilson, defines as 'that wonderful ability to reflect, ponder, and choose'?"

* "As the orthodoxies square off, we self-congratulate and self-segregate behind our 'gated realities,' in the astute words of Brooke Gladstone."

* "Jim sent me his rabbi's sermon about breaking the habits that inflame polarization."

Source: Here's a copy of the sermon: 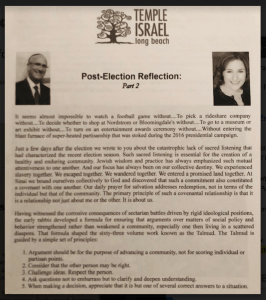 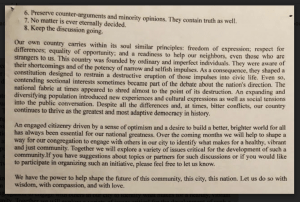